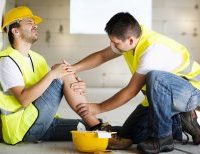 At Brand Brand Nomberg & Rosenbaum, LLP, we aggressively litigate our cases for every one of our clients to obtain the best possible resolution, either by verdict or settlement. We understand and appreciate how the lives of our clients and their families are depending upon what we do, so we fight as if each client were a member of our own family. We do not give up, we do not back down, we do not hand off our clients to another law firm, and we do everything that is necessary within the law to win their case.

Our client was an electrician whose company was hired to help build a new luxury apartment building in Manhattan. Our client needed to use an 8 foot A-frame ladder to reach the ceiling to install temporary lighting. However, the floor was constantly littered with heavy construction debris which prevented him from opening the ladder. The legs of a 6 foot A-frame ladder were smaller and could fit between the debris, but that ladder was not high enough to reach the ceiling except by standing on the very top of the ladder which was not safe. Our client made numerous complaints for months but nothing changed. On the day of the accident, the foreman told our client to continue putting up the lighting by himself and then left on a personal errand. When the plaintiff reminded his boss about the unsafe conditions, he said there was nothing he could do. As our client began to step down from the top of the ladder, the ladder started to tip and both he and the ladder fell onto piles of wooden planks and metal pipes covering the concrete floor. Since that accident, he had three surgeries performed on his shoulders, a spinal surgery on his lower back, and was permanently disabled from working.

We started a lawsuit and litigated the case. I made a motion to the lower court judge arguing the defendants violated the New York State Labor Law in failing to provide proper safety equipment and working conditions, and should be found one hundred percent at fault for the accident and his injuries as a matter of law. The defendants argued that our client was at fault for doing work that he knew was unsafe. In response, I argued that the law is clear when a worker is directed to do unsafe work, he cannot be found at fault if he then gets hurt doing that work. The judge denied our motion and I immediately appealed.

Under similar circumstances, many law firms hire outside counsel to appeal which can cost ten to twenty thousand dollars. However, I wrote the briefs and argued the appeal before 4 appellate judges at no extra cost to my client. Within 30 days of argument, we received a decision stating we had won the appeal. The lower court’s decision was reversed and now the defendants were found one hundred percent at fault as a matter of law. Part of the decision stated as follows:
Denial of summary judgment on plaintiff’s claim pursuant to Labor Law § 240(1) was in error where plaintiff electrician was injured when he fell from an A-frame ladder as he was attempting to descend it. Plaintiff’s use of a six-foot ladder that required him to stand on the top step did not make him the sole proximate cause of his accident where the eight-foot ladder could not be opened in the space due to the presence of construction debris

It was great news, but shortly after I learned my client tried to commit suicide using a kitchen knife because of the pain he was suffering. Normally waiting for a trial date could have taken another 2 years, so I made another motion to the lower court judge asking for an expedited trial in the interests of justice. This time the judge granted our motion. With the pressure of the trial now only a few months away, the defendants settled the case for $3.65 million dollars. The client was both happy and grateful.

We have been in business practicing personal injury law for over 40 years, helping clients and their families who have been injured in an accident. At Brand Brand Nomberg & Rosenbaum, we care about the welfare of all our clients and understand they are relying upon us to aggressively fight for their cause. If you were injured in an accident, or know someone that may need an experienced winning personal injury law firm on their side, call us. The consultation is free, and we only charge if we win.